One of the biggest reasons traditional mapping is not reliable is because it does not account for the variability of terrain such as slope, elevation, soil properties, etc. The Department of Defense knew their current method of predicting the speed at which they could travel would not be accurate without addressing this variability. Sometimes their data would indicate a route was possible, when in fact, they would get stuck. And on the flip side, it might show a route as impenetrable, when actually, it was a viable option.

Reliably predict the speed at which the Department of Defense can traverse their vehicles across a given terrain using simulations together with soil and elevation information.

RAMDO works in conjunction with the simulation model, allowing engineers to input parameter variabilities. Then it builds a surrogate model to approximate the simulation model, which is much more computationally efficient to run. From this, RAMDO is able to produce an output distribution of results. 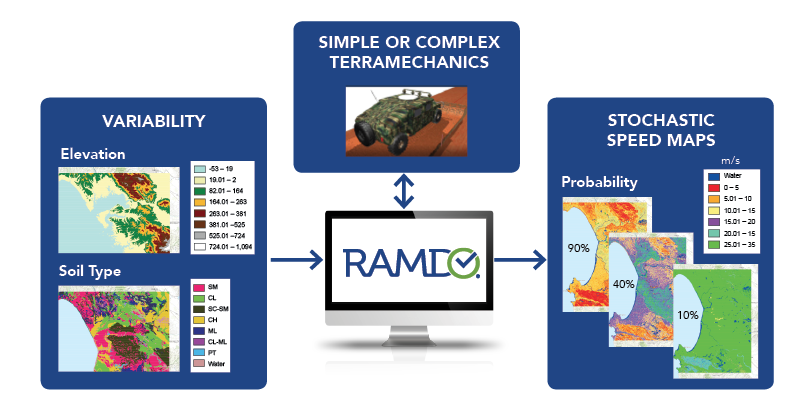 RAMDO worked in conjunction with a terramechanics simulation. The variation accounted for was of the input parameters of soil type, slope, and elevation. The resulting output distribution was a series of predictive speed maps at any chosen probability level.

Deterministic maps without RAMDO show inaccurate obtainable speeds at unknown probability levels. With RAMDO, results are both accurate and reliable.

With the ability to better predict speed and success of military travel, missions will be safer, more cost effective, and reliable. 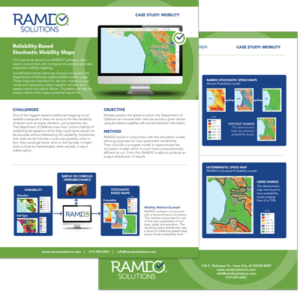 Have additional questions? Need a demo based on your needs? We are here to help.